Eight young traditional Irish musicians from the Philadelphia are have qualified to compete in Sligo, Ireland, in August at the Fleadh Cheoil na nEireann—the All-Ireland music championships.

Two world champions from last year’s Fleadh in Derry, fiddler Haley Richardson of Pittsgrove, NJ, who was the under-12 fiddle champion, harpist Emily Safko of Medford, NJ, who placed first in under-12 in harp,  will be returning to compete against dozens of other qualifiers from around Ireland and the world August 11-17.  They earned their berths at the recent Mid-Atlantic Fleadh in Parsipanny, NJ, sponsored by the Comhaltas Ceoltoiri Eireann, an organization that supports Irish music, dance and culture worldwide.

There will be a fundraising brunch on May 18 at  Molly Maguire’s Pub, 202 East Lancaster Avenue, in Downingtown to help defray the traveling costs of the “Sligo-bound Six,” as they’re calling themselves, with a concert and session. Plans are also underway for two other fundraisers, one in Sewell, NJ, and the other in Philadelphia.

Three other local harpists also won places in their divisions—Caroline Bouvier, 8, of Merchantville, NJ, placed third in the under 12s in her first year of competing; Kerry White, 16, of Vorhees, placed third in the 15-18 age group; and Katherine Highet, 27, placed second in the over 18 group.

The three are students of Kathy DeAngelo who, with her husband, Dennis Gormley, was inducted in the Mid-Atlantic Comhaltas division’s Hall of Fame  during the Fleadh. DeAngelo and Gormley have worked with the other qualifiers in The Next Generation, a program they started with Chris Brennan-Hagy to foster the skills of youngsters interested in performing Irish music. The group meets every second Sunday of the month at the Irish Center in Philadelphia.

“The Hall of Fame event was amazing,” said  DeAngelo this week. “We were so surprised and thrilled to see such a large turnout of friends, family, and supporters from the South Jersey and Philadelphia area.”

When they performed, they made sure it was Philly style. DeAngelo explains:

“We  first played a set of reels that we learned from the playing of Ed McDermott [a Leitrim-born Irish traditional musician who settled in New York and later, New Jersey; De Angelo was his student]. Next we had several members of the Next Generation (Alanna Griffin, Mike Glennan, Patrick Glennan) and our friend Bob Glennan join us for a set of jigs composed by Junior Crehan, in a nod to our late friend Liz Crehan Anderson who was a founding member of the Delaware Valley Comhaltas Ceoltoiri Eirann.

“For our third number, we had more Next Gen musicians (Kerry White and Alex Weir) join us and we acknowledged Kevin McGillian in the audience, another Hall of Famer from the Philadelphia area. We launched into a set of reels we taught the youngsters that we learned from Kevin, and which they performed on the “Ceili Drive” CD by irishphiladelphia.com, the Travers and Tinker’s Daughter set. It was awesome,” she said. 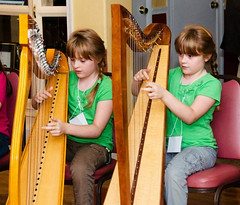 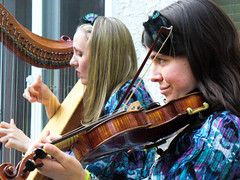 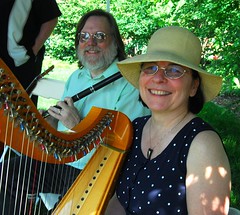