Irish Immigration Center Seniors Star in Their Own Calendar

Declan Forde in the iconic scene from “Waking Ned Devine.”

Don’t order that Sierra Club calendar for 2015. The Irish Immigration Center of Greater Philadelphia has something better hitting the lucrative calendar market this year.

The Center’s full color 2015 calendar features photographs of more than 20 of the regulars at the weekly senior luncheon acting out iconic scenes from 12 popular Irish films of the last 60-some years, from “The Quiet Man” to “Once.”

The calendar idea was inspired by a similar calendar of classic films such as “Titanic” and “Breakfast at Tiffany’s” that were recreated by seniors at a German retirement center last year, says Siobhan Lyons, executive director of the Immigration Center, located in Upper Darby. “I thought it was an excellent idea and lots of fun. I thought it was something we could do, but with Irish films.”

The first person she approached was Declan Forde,79, a self-described “Cork rebel” who now lives in Havertown. “I spoke to Declan, who plays the character on the motorbike in ‘Waking Ned Devine,’ and told him I needed him to get naked for the Immigration Center, he said, ‘Name the date,’” says Lyons, laughing.

You can see Forde half-naked—just shirtless—on a motorbike on the October 2015 calendar page. Husband-and-wife Jim and Kathleen McCaffery appear as actors Glen Hansard and Marketa Irglova from the sweet Irish romance “Once,” strolling down Grafton Street, which is played in the calendar by Elfreth’s Alley in Philadelphia. Tom McArdle was cast as the John Wayne character, Sean Thornton, and redheaded Kathleen Murtagh as Mary Kate Danaher, played by Maureen O’Hara, in the movie, “The Quiet Man.” The “cottage” was portrayed by the Fireside Room of the Irish Center in Mt. Airy. And Barney Boyce donned a brown wig to be Darby O’Gill joking around with the leprechaun, played by Jimmy Meehan in crown, green cape, and white knee socks, from “Darby O’Gill and the Little People”—a photo that required a little perspective trickery.

The Immigration Center partnered with www.irishphiladelphia.com to produce the calendar, which is on sale now online.

“What we think makes our calendar a standout is that we didn’t have a large budget, green screens, or bought costumes,” says Lyons. “We took the idea of the film and interpreted it the best we could with Philadelphia scenes. Where would this have happened in Philadelphia? So it really has a Philly flavor to it.”

Along with Elfreth’s Alley and the Irish Center, the latter which provided the back drop for “Darby O’Gill,” “The Quiet Man,” “The Field,” “My Left Foot,” and “The Commitments,” the photos were shot at McGillin’s Olde Ale House on Drury Lane in Center City (“Michael Collins”), Valley Green in Fairmount Park (“Waking Ned Devine”), the Italian Market (“Agnes Browne”), Harrowgate Gym in Kensington (“The Boxer”) and the Upper Darby Police Department (“The Guard”).

Many of the locations even have an Irish connection. “McGillin’s is the oldest Irish pub in the city,” says Lyons. “The Upper Darby police station—there are plenty of Irish there. If you look at the census, most of the original residents of Elfreth’s Alley were Irish people who worked as weavers and linen workers. And the Italian market? Well, a lot of our people married their people!”

The Irish community also helped. The seniors created their own costumes and props with the help of Leslie Alcock, the social worker from County Carlow who runs the senior programs at the center. (She’s listed as “key grip” in the calendar credits, but she was also prop girl, lighting director, and senior wrangler, among other things.)

AOH/LAOH Div 25’s Pearse and Liz Kerr connected the Center with Charlie Sgrillo of the Harrowgate Boxing Club to arrange to photograph Pete McEneany in his role of Daniel Day-Lewis in “The Boxer” at the club in Kensington which regularly hosts Irish boxers in the summer in AOH-sponsored bouts. Sgrillo even taped McEneany’s hands to make the photo look more authentic.

Gary O’Neill of Drexel Hill responded to an Irish Philadelphia Facebook request for a motor scooter for the “Waking Ned Devine” scene. One Saturday, he hitched his cherry red, nonfunctional Honda scooter to the bed of his truck and drove it to Valley Green where he, his daughter, Eve, and friend, Brian McCaul, unloaded it and set it up. “We were going to use Declan’s son’s motorcycle, but Declan has two artificial hips and he was not getting a leg over a motorbike,” explains Lyons. He had no trouble with the scooter, though taking his shirt off on a cool autumn day was a little daunting.

Besides making some money for the Center’s senior programs, Lyons hopes that the calendar will make people think a little differently about the elderly. “There’s a stereotype that older people are just sitting down in wooly slippers waiting to die,” she says. “Working at the Irish Immigration Center, I have another view. If they were devils at 15, they’re still devils when they’re 75 and heaven help us, they worse because they don’t care anymore what people think!”

The making of the calendar proved to be so much fun—“we laughed through the whole thing,” says Lyons– that now more of the seniors want to be in next year’s production, theme still undetermined. “We might have to be doing some large crowd scenes,” she laughs.

Check out our photos below–some are actual calendar photos, others, outtakes from the shoots. 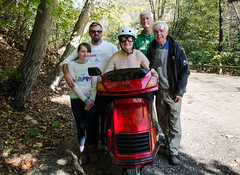 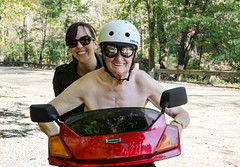 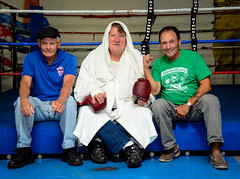 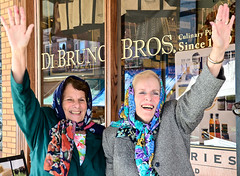 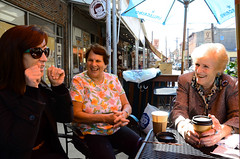 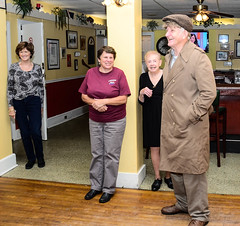 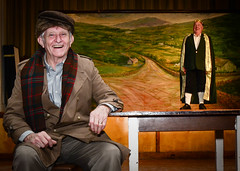 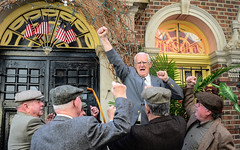 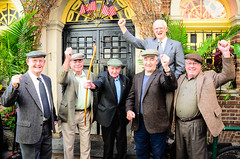 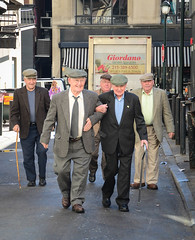 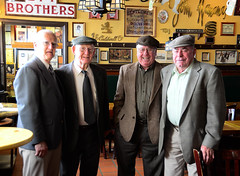 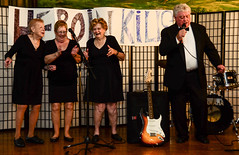 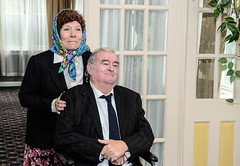 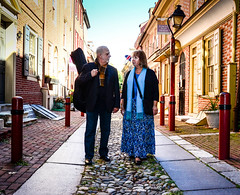 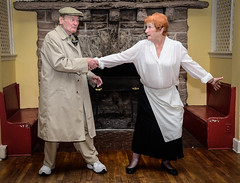 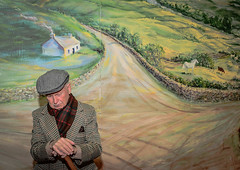 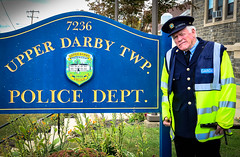 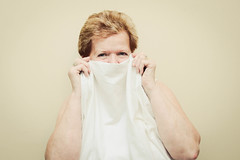