The Christmas Tree Arrives at the Plough

I’ve always wondered how they got that huge Christmas tree into the Plough & the Stars.

And make no mistake—every year, the Plough, at 2nd and Chestnut, manages to wedge a fir tree that stands over 20 feet into a corner or the restaurant, not far from the fireplace. (Not too close, though.)

I had heard rumors that it was lowered into place through trap door just an arm’s length from the restaurant’s second level. I Never quite believed it, but still … how else?

Now I know. It’s really simple. The tree comes into the Plough the same way everybody else does—through the front door.

On Saturday night, the Plough posted an update to its Twitter feed indicating the tree would arrive sometime around noon on Sunday.

So I arrived at the Plough Sunday morning around 11:30, staked out a hightop table near the bar, ate breakfast, and pestered the waitstaff for updates. I was like a child awaiting Christmas. When is the tree coming? They responded in the way my mother did, with one word: Soon.

They were more patient than my mother was.

Round about 12:30, I noticed a big commotion just outside the front door. I’d notice a big U-Haul-style truck pulling up, but I couldn’t imagine a 20-foot-plus tree inside. I headed outside, camera in hand, and there it was in the back of the truck, wrapped up in string like a Christmas present.

Several guys who otherwise would have been waiting on tables and filling up water glasses were assembled outside, wearing gloves, and trying to figure out the best way to get it out of the truck and in through the front doors. The answer: fat end first.

I stayed for a time, watching several Plough guys, jamming the trunk into a massive stand and manhandling the tree into the corner, trying to get it standing up straight, which didn’t take as long as I would have thought. They cut the string, and there it was, ready to go.

I left as they were starting to string lights onto it. The decorating would actually take a couple of days to complete.

I shot a bunch of photos documenting the whole process. There’s also a time-lapse video (scroll down) shrinking an hour’s worth of work into 14 seconds.

Consider it all an early Christmas present. 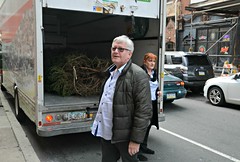 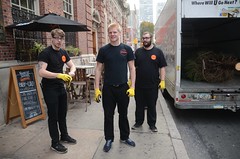 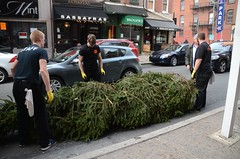 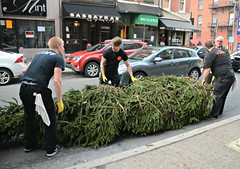 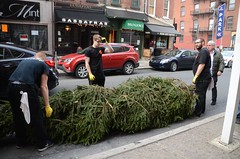 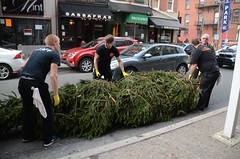 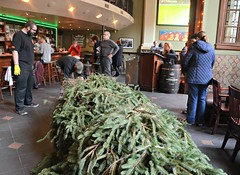 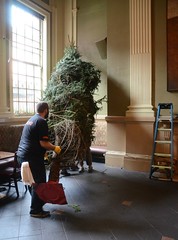 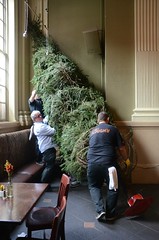 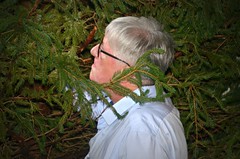 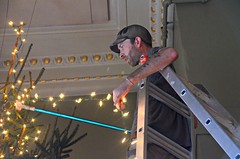