Neither rain, nor rapidly dropping temperatures that changed the rain to snow, could keep away the crowd that gathered Sunday at West Laurel Hill Cemetery to honor the 57 Irish laborers who died at Duffy’s Cut in the summer of 1832. The story of the workers who came from Counties Donegal, Tyrone and Derry to build Mile 59 of the Pennsylvania Railroad, but who were all dead within six weeks of their arrival, is one that has been brought out of the shadows of history by brothers William and Frank Watson. Along with a strong team of volunteers and supporters, they continue to work to recover the bodies of all 57 men and women.

Of the seven that have been reclaimed, two have returned home to Ireland. John Ruddy, from Donegal, is buried in Ardara in a grave donated by Vince Gallagher, and Catherine Burns rests in Clonoe Parish in her home county of Tyrone. Here in West Laurel Hill, all were remembered on the 7th anniversary of the dedication of the memorial.

The tribute included a procession led by the Duffy’s Cut Pipers, the national anthem of the United States and Ireland sung by Vince Gallagher, and remarks by Nancy Goldenberg as president & CEO of West Laurel Hill, William Watson and Frank Watson, Bob McAllister of the Emerald Society of Chester County, Kathy McGee Burns and Frank McDonnell on behalf of the Donegal Society and a poetry reading by author and historian Marita Krivda. END_OF_DOCUMENT_TOKEN_TO_BE_REPLACED

“Duffy’s Cut is both a place, and it’s a story. It’s a place about 20 miles west of Philadelphia along the railroad tracks so it’s a physical location, but Duffy’s Cut is also a story. And it’s the story of the death of 57 Irishmen in 1832.” ~ Frank Watson

In their new book, “Massacre at Duffy’s Cut,” William and Frank Watson detail their 15-year odyssey to reclaim the Irish laborers whose lives were cut short and their bodies buried under Mile 59 of the Pennsylvania Railroad in the summer of 1832. They sat down with Irish Philadelphia in the Duffy’s Cut Museum at Gabriele Library, Immaculata University, where they shared their behind-the-scenes account of not only what happened to the workers, but how their mission began when they became the keepers of a secret file inherited from their grandfather.

Watch the interview, and then come to the Commodore John Barry Arts & Cultural Center (The Irish Center) in Mount Airy on Sunday, December 9, at 3 p.m. for a book signing that will follow a talk and update on what’s next for the dig site. For more information, go to the Facebook Events page here.

For more information on Duffy’s Cut, and to check out “Massacre at Duffy’s Cut,” visit their website.

Sinn Fein member Sean Conlon, who spent part of his childhood in Delaware County, graciously shared with irishphiladelphia.com the remarks he made at the grave of Luke Dillon at the Easter Rising Ceremony at Holy Cross Cemetery in Yeadon.

A chairde,
It is an honour for me to be here, on the occasion of the centenary year of the 1916 Easter Rising and stand with true friends of Ireland, and advocates for her liberation, to commemorate the contribution and sacrifices of Ireland’s patriot men and women associated with the Rising, and in all campaigns of resistance waged against the foreign occupation of our homeland. Today here at Holy Cross Cemetery, we invoke in particular, the memory of those who resided in the Philadelphia region, and that despite the distance of separation and communication, remained firm in dauntless spirit, and action, in supporting the efforts of their comrades in Ireland.
Since our last assembling here twelve months ago, we reflect on loved ones who have would regularly have attended events such as this commemoration or other opportunities to raise the flag for Ireland and her total independence. As a fellow activist who I recall in years when I lived in this area is the name of Tommy Flynn, along with the name of Sean Rocks, who as a member of the Breen family, is also especially missed today. END_OF_DOCUMENT_TOKEN_TO_BE_REPLACED

The annual Easter Rising ceremony at Holy Cross Cemetery on April 3 took on special poignancy this year, which marks the 100th anniversary of the Dublin battle between Irish revolutionaries and British soldiers that played a pivotal role in the birth of the Irish Republic in 1922.

Members of the families of three prominent Irish freedom fighters who are buried in the Yeadon cemetery took part in the ceremonies, which included rifle salutes by the Pennslvania 69th Irish Volunteers re-enactors, speeches by Sinn Fein’s Sean Conlon, the Monaghan town councillor who spent part of his childhood in Delaware County; Judyann Gillespie McCarthy of the local 1916 Easter Rising Commemoration Committee, and Tyrone native and historian, Patsy Kelly. END_OF_DOCUMENT_TOKEN_TO_BE_REPLACED

Philadelphia Remembers the Heroes of 1916—Including Its Own

Imagine, said Villanova History Professor Craig Bailey, PhD, that in 1776, the Revolutionary army under the command of General George Washington had lost to the British and “all our founding fathers were captured and executed.”

Although Bailey was preaching to the converted and well-versed this week at Villanova University’s Falvey Library—many in the audience were members of the region’s 1916 Easter Rising commemoration group—it was an apt way of putting the 1916 Irish rebellion into a perspective the average American could understand. It was the lost battle that eventually led to Ireland’s independence,

The Proclamation read on the steps of the General Post Office in Dublin by teacher and revolutionary Padraig Pearse, addressed to “Irish men and Irish women,” owes at least some of its sentiment to Jefferson’s Declaration of Independence prose aimed at freeing American men and American women from the yoke of British colonialism. END_OF_DOCUMENT_TOKEN_TO_BE_REPLACED

A large crowd gathered Sunday at West Laurel Hill Cemetery to remember the 57 Irish immigrants from Donegal, Tyrone, and Derry who came to work on the Philadelphia and Columbia Railroad in June 1832, and who died six weeks after they arrived on a lonely stretch of track in Malvern.

Brothers Bill and Frank Watson have led the archeological research leading to the discovery of their hidden grave, and they continue to unravel the secrets of the victims—including the lone woman, Catherine Burns, whose remains were repatriated to her native County Tyrone last July. Among the speakers: Bill and Frank Watson, Philadelphia Mayor Jim Kenney, and Donegal Association President Frank McDonnell.

Given the ignominious death of the Irish immigrants and the prejudice they endured, the memorial ceremony brought to mind many of the issues currently being raised during the current presidential campaign.

We have close to 25 photos from the ceremony, and one video that sums it all up. END_OF_DOCUMENT_TOKEN_TO_BE_REPLACED

There was a full house on Mischief Night at The Irish Center in Philadelphia for an evening of original, ghostly tales from five writers who composed them just for the event.

The authors, who came in costume, included Marita Krivda, author of the historical book, “Irish Philadelphia,” who also organized the evening’s entertainment; Marian Makins, PhD, who teaches critical writer at the University of Pennsylvania and is a singer; Thom Nickels, the author of 11 books, the latest of which is the soon-to-be published “Literary Philadelphia;” Gerry Sweeney, and Lori Lander Murphy, a librarian, genealogist, and writer and photographer for www.irishphiladelphia.com.

Lori agreed to share her story of young love and death with us so you can feel like you were part of the evening. END_OF_DOCUMENT_TOKEN_TO_BE_REPLACED

Catherine Burns is Laid To Rest In Tyrone

Catherine Burns’ remains are carried by women named Catherine from Clonoe, County Tyrone. The Watson brothers are at right, playing the pipes. Photo by Jim McArdle

On Sunday, July 19, Catherine Burns’s small casket, holding what little remained of the 29-year-old widow who died in the railroad work camp known as Duffy’s Cut in 1832, was carried from St. Patrick’s Church in Clonoe, County Tyrone, to her final resting place by three local women also named Catherine.

For 180 years, Burns lay under the ground in an unmarked grave along with 56 other Irish immigrants hired to build a rail line near Malvern in Chester County, now part of Amtrak’s northeast corridor. She had traveled with her father-in-law on the barque ship, the John Stamp, whose log noted that neither had any luggage. Six weeks after the immigrants arrived from Tyrone, Derry, and Donegal, they were dead, either of cholera or of violence.

Her burial in her home county was the fulfillment of the goal of the men who unearthed these long-forgotten immigrants, both literally and figuratively. “It was something that we had always hoped to do,” says Dr. William Watson, a history professor at Immaculata University who, with his brother Frank, a Lutheran minister, set in motion the search for the Duffy’s Cut victims after discovering a secret railroad file about the incident in their grandfather’s papers. “Once we found them, if we were able to identify them, we wanted to repatriate them,” he said.

In 2013, the Watson brothers and colleague Earl Schandlemeier were able to return the remains of the youngest of the workers, John Ruddy—identified through a forensic examination of his bones—to Donegal, where he was born. He is now buried in the family plot of Vincent Gallagher, president of the Philadelphia Irish Center.

Like Ruddy, forensic scientists determined that Catherine Burns had died of blunt force trauma, likely at the hands of a group of vigilantes determined to stop the spread of cholera that had ravaged the small encampment.

That story, as well known now in Ireland as in the US, is likely what filled St. Patrick’s Church the Sunday of Catherine Burns’ funeral mass, which was said by the church’s pastor, Father Benny Fee. “The story resonates with a lot of Irish people who have little black holes in their family history, family members who came here and just vanished,” said Watson. ‘They have sympathy for anyone that young who experienced such hardship so senselessly. Catherine Burns died just like John Ruddy died, of violence.”

It was Father Fee’s idea to have Catherine Burns’ casket carried by other women of the parish who shared her first name, said Watson. “His sermon was fantastic,” he said.

“It is our solemn privilege to welcome home to her native Tyrone Catherine’s mortal remains and to lay them to rest with the prayers and rites of the church and with the dignity and respect they deserve,” Father Fee told the congregation, according to published accounts. “Catherine is one of our own. She’s no stranger—she has Tyrone blood in her veins.”

From his pulpit, Father Fee thanked the Watsons and Schandlemeier for bringing “Catherine back from her exile to her native pastures. Now there’s no fear, no terror for Catherine any more.”

There are still 50 other victims of Duffy’s Cut whose bodies have not been recovered. Radar imaging has found what Watson calls “an anomaly,” a large apparently empty space that may have been left when bodies buried underground decomposed and collapsed. Core samples of that area are scheduled to be taken in mid-August, he said.

The cores will be taken about five feet from where the anomaly is seen on the scan so as not to disturb anything buried below. Forensic scientists will then sift through the circular samples, which will be encased in canisters about a foot long and four feet wide, to determine if there are any human remains before a dig gets underway.

“If what we find what we expect to find,” said Watson, “this maybe the worst mass murder in Pennsylvania history.”

The photos below were taken by Jim McArdle, who was one of several representatives from the Philadelphia area who attended the funeral service. The others included Irish Center President Vincent Gallagher, Donegal Association President Frank McDonnell and his wife, Kathleen, and Donegal Association members Nora and Liam Campbell and John Durnin. 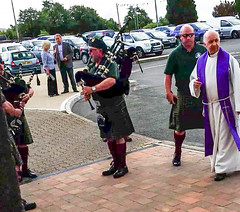 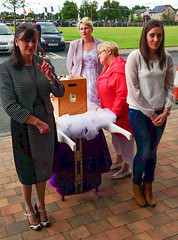 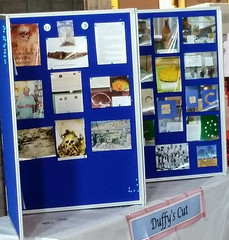 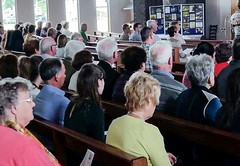 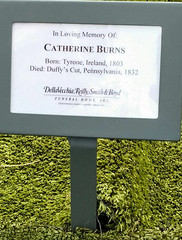 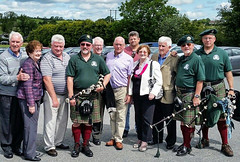 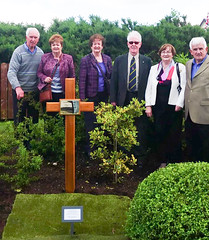 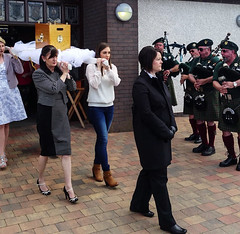 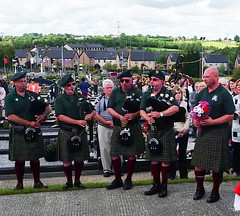 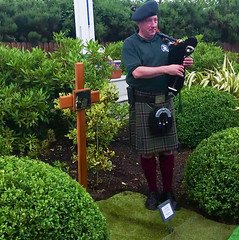 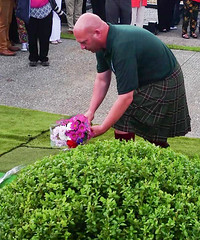 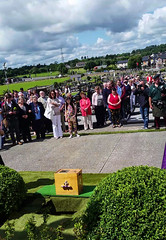