A Wall That Tells An Irish Story

Joe Magee in the midst of his mural.

A canvas was too confining for artist Eric Okdeh. That was clear when, after graduating from Tyler School of Art , he got an opportunity to exhibit in a gallery. “All throughout college I was painting murals and the idea of painting on canvas just didn’t click,” says the Philadelphia native. “I like being able to work on public art. I like the inclusiveness, the ability to tell people stories.”

You’ve probably seen one of Okdeh’s murals. He’s done more than 80 all over the city, most for the city’s Mural Arts Program, including an homage to work, based on interviews with local residents, called ‘How We Fish,” at 8th and Cherry Streets and a poignant look at the effects of incarceration on families, “Family Interrupted,” on Dauphin Street which included the work of some of the men from Okdeh’s mural arts classes at Graterford Prison. He’s had commissions as far away as Aman, Jordan, and Sevilla, Spain.

One of his most recent works tells a story that is very personal for the region’s Irish community. It was a private commission from his childhood friend, Joe Magee—“we both grew up in the same Southwest Philly Irish Catholic neighborhood”—who, along with being a director, partner and information security expert at Deloitte and Touche, owns Marty Magee’s, a pub in Prospect Park, Delaware County.

Drive down Route 420 into the heart of Prospect Park and you can’t miss it—a masterpiece on the wall of the pub, overlooking the parking lot. It tells the story of Duffy’s Cut—57 Irish immigrants who died working locally on the railroad. It pays tribute to Commodore John Barry, the Wexford man and Philadelphia transplant who is considered the father of the US Navy. It portrays the Molly Maguires, a group of Irish coal miners who fought—and died—for equality in Pennsylvania’s mines, and Black Jack Kehoe, the leader of the Mollies, whose memory is kept alive by the local Ancient Order of Hibernians division to which Joe Magee belongs. The mural images also stretch back to Ireland—there’s Michael Collins, a hero of Irish independence, and a tribute to other muralists, the Bogside Artists, whose murals, including one of a child in a gas mask, are synonymous with more recent struggles in Derry City in Northern Ireland

“And if you squint your eyes and take a step back, the color base we did was the tricolor,” says Magee. “I wanted to meld all the local Irish history with some of what I spent a lot of time researching—where my family comes from, Antrim, the heart of the troubles.”

Magee bought the pub about eight years ago and had just enough money left over to do a basic renovation of the place, which was always a local tappy (and for a time, a biker bar) that drew construction laborers at the end of their shift, usually still wearing their grubby work clothes.

But Magee wanted his pub to be “more of an Irish pub and a place where someone would be comfortable taking their wife,” so this year he embarked on a renovation on a grander scale. But not before he engaged the “regulars” in a discussion about what changes he wanted to make. “My goal was to keep everybody who was here now here, but to be able to have anyone else walk in and feel comfortable.”

When he held his first ersatz “town meeting” of bar regulars, 80 people showed up and they were, he says, “very open-minded about it,” even the establishment of a dress code. There was buy-in, which made Magee feel like he was on the right track.

Today, Magee’s Irish Pub is more Irish inside and out. A renovated second floor holds three high-end billiards tables which attracted the local pool league. “We added some traditional Irish décor, but with a modern American feel,” says Magee. “It’s like Frank Daly (of Jamison and American Paddy’s Productions) says, it’s all about being Irish-American. “

And the mural, he says, makes the statement loud and clear. “We’re so close to 95 and we wanted to give people enough reason to pull off the road and check it out and also come in an have a beer—maybe.” He laughs.

It was a no-brainer to tap his friend Eric for the job. “I called him two years ago and sent him a picture of the building and told him we were going to clean it up (it was covered in siding) and that I wanted him to do something awesome with it.”

Okdeh, who usually does voluminous research on his mural projects, didn’t have to do much for this one. “Joe felt really strongly about what he wanted to see on the wall.”

Since the Duffy’s Cut incident occurred in 1832, there were no photographs for Okdeh to use for reference. “I went through loads of old photos searching for railroad workers, and many of them were clearly Chinese,” he says. He found enough information on the era and the clothing to allow him to imagine the Duffy’s Cut victims, standing and stooping as if they were posing for a picture.

Portraying the Bogside murals was trickier. They’re someone else’s art, so instead of reproducing the gas mask mural, he found the original photo of the boy and reproduced that rather than the mural itself. “Reproduced” is probably not the right word for what Okdeh does. It’s not like tracing. “I put my own kind of spin on what the photo is depicting. It’s not like lifting someone else’s photos.”

The mural will be dedicated on Saturday, starting at 2 PM at Marty Magee’s, 1110 Lincoln Avenue, in Prospect Park. Philadelphia St. Patrick’s Day Parade Director Michael Bradley will emcee the event, which includes an introduction of Eric Okdeh, remarks by Prospect Park Mayor Jeff Harris, a musical tribute by Blackthorn, and an open social event in the pub with the Ancient Order of Hibernians featuring Galway Guild, Joe Magee’s band.

For Joe Magee, the mural has many meanings. Besides a new image for his pub, it also represents the same kind of thing a reunion does—an unforgotten and unbreakable bond formed in childhood. “The neat part for me is that I didn’t have to wonder how to make this happen,” says Magee. “Eric and I grew up playing soccer together at St. Barney’s (St. Barnabas) and then we went out and did stuff with our lives. I’ve always supported his work. It meant a lot to be able to work together on this.”

View our photos of the mural below.

You can view Eric Okdeh’s other murals here. 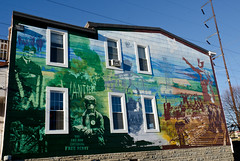 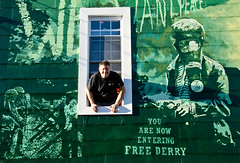 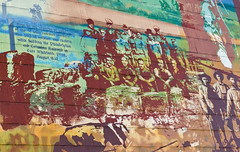 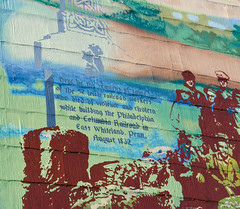