Duffy’s Cut: A Voice in the Arts

They’ve been called the “forgotten souls” of Duffy’s Cut, but the 57 Irish railroad workers whose deaths in 1832 remained a mystery for nearly 180 years are now well on their way to achieving immortality.

The story of the immigrant laborers hired by Philip Duffy to work Mile 59 of the Pennsylvania-Columbia Railroad in Malvern, PA, but who died within six weeks of their arrival and were buried in a mass grave alongside the tracks, has captured the interest of the news media since it first came to light through the efforts of the Duffy’s Cut Project, led by Bill and Frank Watson, Earl Schandelmeier and the late John Ahtes.

But the story is far from finished (there is still much excavation work to be done, DNA testing, historical and genealogical research), and the impact of the discovery of the Duffy’s Cut site has significance that demands an audience far beyond the one it’s already found.

Irish Network Philadelphia President Bethanne Killian, who is also deeply involved with Duffy’s Cut, realized that the project has established a voice in the Arts. To promote awareness of the presence it’s found in film, music, theater, painting and literature, as well as to raise funds for the continuation of the work, she organized “Duffy’s Cut & the Arts: A Symposium.” Held at Immaculata University, where Bill Watson is both a professor and the History Department Chair (and it’s also the home of The Duffy’s Cut Museum as well as the center of the project), the Symposium was a daylong event that focused on the artistic achievements that are bringing Duffy’s Cut into greater public awareness.

“I’m still amazed at the number of people from the Philadelphia area who are completely unaware of Duffy’s Cut,” Bethanne explained. “Anyone I’ve shared the story with who hears it for the first time is fascinated and appalled. We need to get the word out there—this isn’t just for history buffs. This is a human story—and given its reach into the art world—the humanities as well.”

With an appearance by Irish Vice-Consul Anna McGillicuddy, who braved the trip down from New York for the occasion, the Symposium officially was underway.

Throughout the day, there was music provided by Vince Gallagher and his Band, Marian Makins (who sang Wally Page’s haunting song “Duffy’s Cut”), Pat Kenneally (who sang her original song “Duffy’s Cut” that won first place in the 2013 Pennsylvania Heritage Song Writing Competition), Karen Boyce McCollum, Rosaleen McGill, the band Irish Mist and Bill and Frank Watson on the bagpipes.

There were readings by poet John Bohannon who recited three poems from his collection, “The Barmaids of Tir na Nog,” writer Kelly Clark who has a forthcoming book called “Duffy’s Cut—A Novel” and writer Kristin Walker whose forthcoming book is titled “Between Darkness and the Tide.”

Maria Krivda Poxon performed scenes from her play “Ghost Stories of Duffy’s Cut” with actor Mal Whyte, there were showings of the documentaries “Ghosts of Duffy’s Cut” and “Death on the Railroad” and the presentation of the music video “57” from Kilmaine Saints.

A lot of interest was generated by the panel discussions. The first was “Duffy’s Cut and The Pennsylvania Railroad” with Bill and Frank Watson and Earl Schandelmeier. The second was titled “Duffy’s Cut: Why It Matters” featuring CBS3 news reporter Walt Hunter, film producer and director Bill Daly and actor and Drexel University Film Studies Professor Pat McDade.  Daly and McDade have partnered to form their own production company, Duffy’s Cut Films. They have three feature films in development, and first up is a movie based on Duffy’s Cut. They have the script written, and filming is scheduled to begin in Ireland in April of 2015.

Walt Hunter, who was the first Philadelphia area reporter to cover the Duffy’s Cut discovery explained why the story resonated with him from the beginning. “This was a no-brainer for me. My grandfather was a railroad engineer. He came over from Ballina in County Mayo…it is a very captivating story…at it’s most basic level it is a deeply human story of people with a hope, a dream…and everybody dead within six weeks.”

It was Pat McDade who summed up the the motivation behind the upcoming film he and Bill Daly are developing. “These guys who died, these 57 men, they’re the real Irish story, and we never hear that…here is the beginning of it. Because there are 8,000 other stories out there, about these hardworking, honest people that come to try and find America and don’t find it. And then some of them do. And we’ve got to make sure to get the story told.”

A CD titled “Songs of Duffy’s Cut” was introduced at the Symposium, with all proceeds going to raise money for the Duffy’s Cut Project. It will be available at future Duffy’s Cut events and may also become available for purchase online.

Check out our photos from the day’s events: 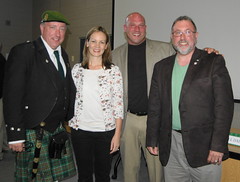 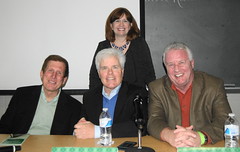 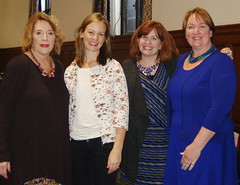 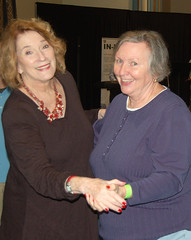 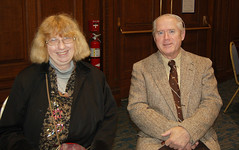